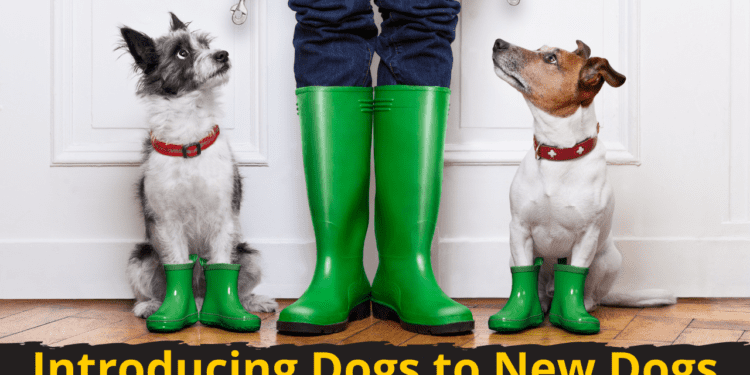 Let’s face it. Although dogs are social animals and they often enjoy the company of human beings. But when it comes to introducing dogs to new dogs, you will have to work hard on it. There are chances that your dog will either accept or reject the new pup.

Now the question is: what is the right way to introduce a new dog to your old pet? What are the common mistakes, even experienced pet owners do when socializing dogs with strange pets? And how to avoid these mistakes?

Like human beings, dogs also have different natures and personalities. It depends on whether you are adding a new pup to your pet household or your dog just encountered a stranger pet (another dog) in the park. Some dogs happily accept new family members while others can be offensive as well.

Introducing one dog to another dog

If you plan to bring a new pup, make sure you are staying at home for the next whole week. You have to closely monitor the reactions of your older dog when he sees a new dog. It would be great if both of them are not left alone when meeting for the first time. Let the new dog adjust in your house and give the older dog some time to understand that he has got a new buddy to live with.

Prefer a neutral area for the first introduction, instead of doing it at your house or in the backyard. Some dogs instantly get jealous and you never know how your older pet reacts. Also, it is observed that a male tries to dominate a new female and two females also aren’t the best companions. So a combination of two males works for most people.

Make sure both dogs are on their leashes. However, you can loosen the leashes if the situation is in control. But if they get nervous or start being aggressive, you will need a human partner to control each dog.

Let your human partner walk side by side to you and approach your older dog from behind. This way, you both can walk with the dogs at a specific distance and notice the behavior of both. Make sure there are not too many distractions in the way and end the walk at your house.

Things To Avoid when Introducing Dogs to New Dogs

Avoid your house to be the first meetup destination. A yard can likely be a place where you can loosen the leash and allow both dogs to socialize and play. Once you notice a welcoming approach from the older dog, you can enter your house also.

The entrance in the house must be simultaneous. This way, both dogs will have equal time to react to the situation and no one will have the boss mode turned on.

Double the supplies that you used for the former dog. From water bowls to plates, and sleeping mats to toys, everything should be plenty. If they don’t have access to their personal items, the friendship can convert into a rivalry.

Let the former dog have its meal in the same place, but arrange a new feeding spot for the newcomer. Dogs often hide their feelings and if you change the routine of the former pet, he might get sick or become stressed. The new dog is yet to set his routine so there is no issue with what you chose for him.

Learn 7 Tips & Tricks To Travel With Your Dog.

If you feel that both dogs are violent when you offer treats, set a different schedule for both animals. Dogs can become aggressive and pounce at each other in order to grab their favorite bone, chew or even toy.

Often one dog gets possessive when the new pup approaches or tries to use its possessions. In such a case, keep both dogs separate and don’t allow them to share things.

If there is an age difference between both dogs, you will need to be very attentive as the older canine can target the younger one. You will have to arrange different resting places, utensils, and toys according to the size and age of the new pup.

During play hours, both dogs can get excited and even growl at each other. Before anything goes intense, set different playtimes for both pets. Avoid things that induce anxiety in them. If you have kids at home, keep them away until both pets are happily familiar with each other.

Hope you’ve learnt something new when Introducing Dogs to New Dogs, if you have another 5 minutes you can check the article below.

Have you ever wonder What Does It Mean When Your Dog Talks Back To You? Find out here.

Most if not all of you know that a new dog needs time to start liking you. You also know...

Are You Wondering How To Get Cats And Dogs To Get Along? The rivalry between cats and dogs is infamous....

All dog owners and especially new ones have one question on their mind. How tight should a dog collar be?...

Have you ever wondered how old your dog is in human years? A lot of people have. However, calculating the...