How Many Bones Does a Dog Have?

One of the most interesting questions, how many bones does a dog have is very common these days. Some will say the same number as humans.

Others will say 500 while some will say some small number. If you are a dog owner and you really want to know the answer, we recommend you to take a look at the article below.

The main answer is actually very simple. All dog breeds have between 319 and 321 bones. So, the next time you see a question such as how many bones does a dog have you will know the correct answer. But, there are a lot of other things you should keep in mind.

Humans have fewer bones, 206 in fact. Of all the bones in humans, 106 of them are in our feet and hands. For instance, humans have 27 bones per hand and also 26 bones per foot. Dogs are different.  They do not have plenty of bones in the legs or paws. In reality, most of the dog bones are vertebrae and teeth.

The main difference in bone quantity depends on the tail. For example, dogs with a long tails will have more bones compared to with short tails.

Skeleton of a dog is a masterpiece

Skeleton is made of bones and it has a lot of purposes in the body, something we will have to address later on. A skeleton of a dog is a masterpiece. First of all, they have disconnected shoulders and they do not have a collar bone. This allows dogs better shoulder movement and helps them run faster.

When it comes to teeth, dogs have 42 teeth. These are sharp and pointy teeth that are actually ideal for ripping the flesh from prey. You may know that dogs are classified as a carnivore but they are also omnivores due to the fact they will eat plants and other foods.

For comparison, humans have 32 teeth and they are completely different. But, humans have much more taste buds than dogs.

A dog will usually have 1.706 taste buds which isn’t much. This allows him to tell a difference between certain foods and tastes. Humans have 10.000 taste buds which help us tell a specific taste of almost anything.

Purposes of the skeleton in a dog

There is no need in telling you that bones are used to form a skeleton. So, almost all 320 bones in a dog are used for this purpose, except the teeth that have a different purpose. The functions of a skeleton are stunning and it is also something you would like to know. There are many points we will have to discuss.

The first and the main function of the skeleton is to offer support to the body. Without this vital component, the body will collapse. Some bones are connected with ligaments and they provide movement. Others are fused and they offer support only.

This system is responsible for movement alongside systems of muscles and ligaments. When all of these are working together, a dog can move, run and jump. Obviously, without a skeleton, a dog won’t be able to move.

Inside the bones of a dog and a human is red marrow. This is used for the hemopoiesis process which basically makes blood. In other words, your blood is made inside the bones and delivered to the rest of the body when needed.

This is one of the most complex and the most impressive functions of the skeleton in most, living creatures.

The complete skeleton will be used as a foundation or a base on which the rest of the systems are formed. As you should know, this means that the skeleton is used to form the shape or better said, to make your dog look like he is right now.

In essence, the skeleton is formed of almost all the bones in the body and it provides the base, shape, and movement alongside protection. Now you know why keeping bones strong in your dog is so important.

Bones in a dog have a massive role and they form one of the main systems that has all the important functions.

Now you know the answer on interesting, how many bones does a dog have a question and you can even provide additional answers to related questions. We can say that you are a more professional dog owner now.

You can check out my other blog post here:

Tags: How Many Bones Does a Dog Have
Tweet1Share2Pin2ShareShare
Previous Post

How To Train A Migraine Alert Dog To Alert

Dogs are not creatures who will be scared all the time. They are strong, confident and they are able to...

If you are a pet owner and you have a pregnant dog you will want to read this content. Signs...

Yes, this is a guide. The first thing you need to know is that naming your pet can be a... 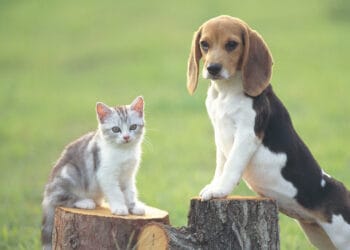 Why Are Dogs Better Than Cats? Many people want to know which pet is better to adopt, dog or cat....